The latest amazing new building to join Dubai’s fabled cityscape isn’t a mega-tower or super-skyscraper. It’s a graceful, curved, low-rise structure with a hole in the middle.

With its pale steel panels covered in Arabic script, it looks like a traditional bangle that might adorn the arm of a princess in The Arabian Nights — although more prosaic souls have likened it to a big Hula Hoop.

This is The Museum of the Future, a display dedicated to the cities and technologies of tomorrow. It was due to open in 2020 — but hasn’t. 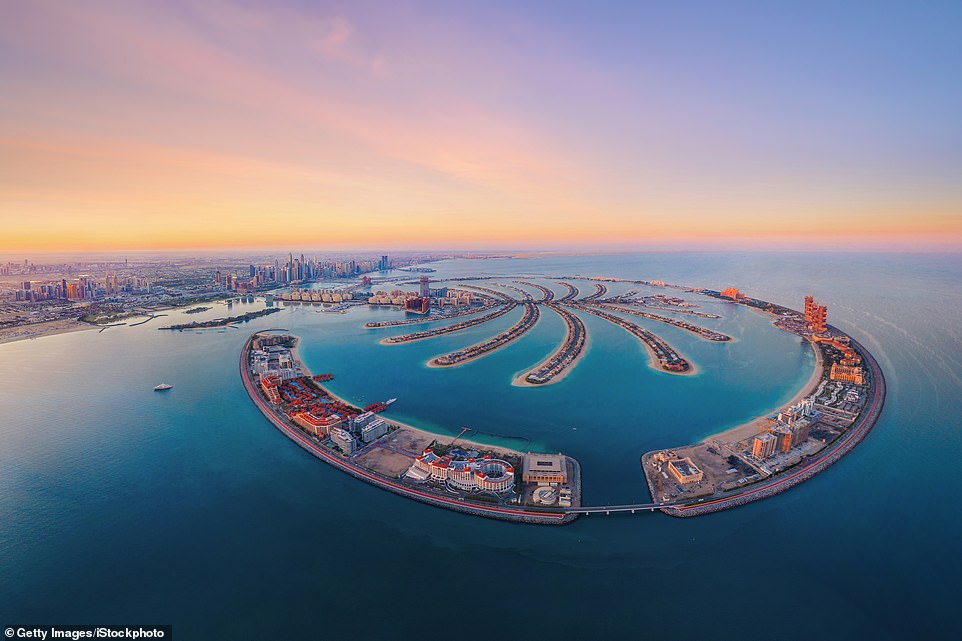 Palm seas: The artificial islands in Dubai at sunset. The Daily Mail’s Mark Jones visited Dubai last week and found that it very much feels like a city on hold 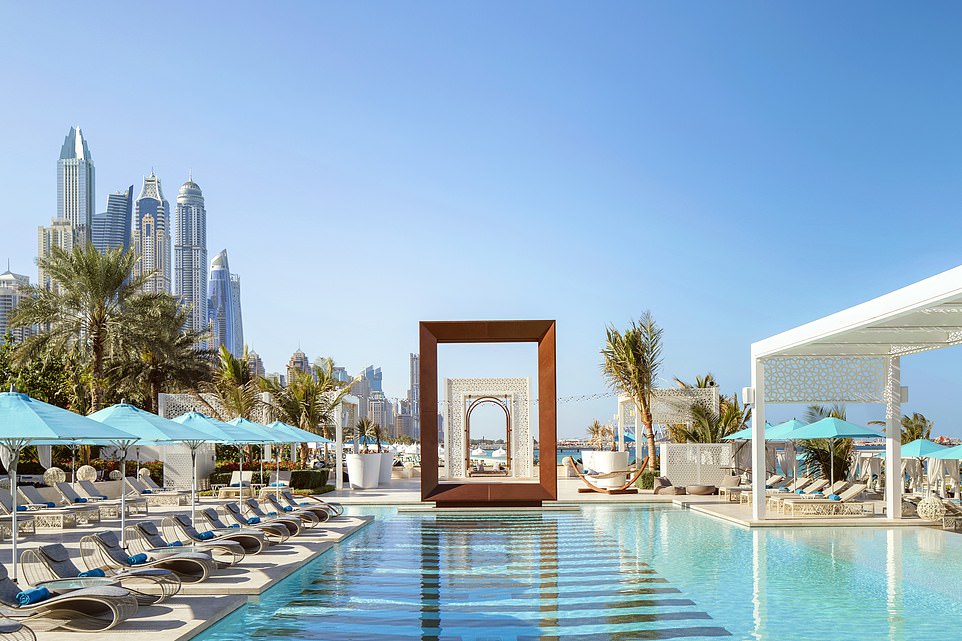 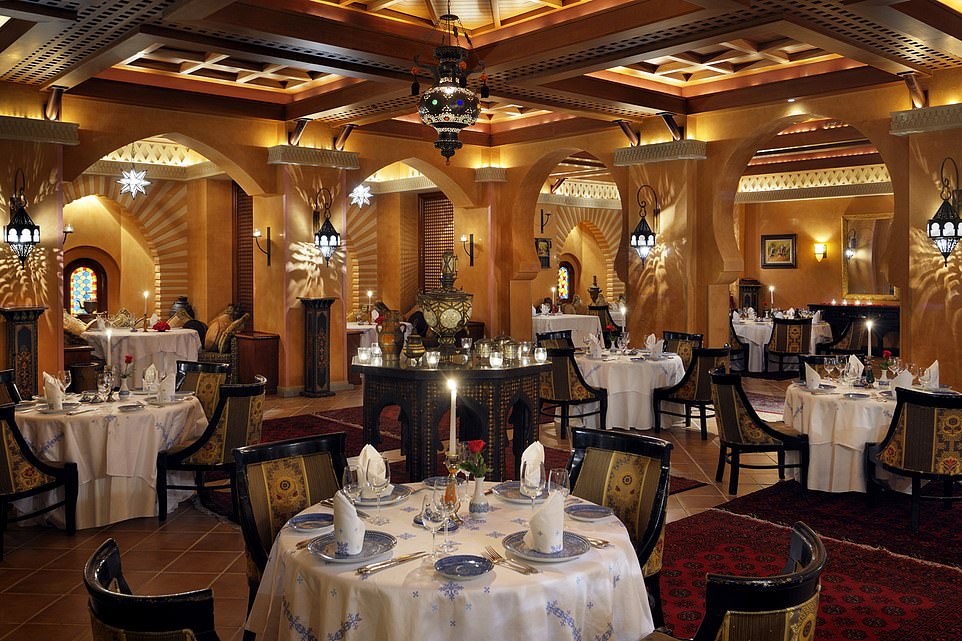 The One&Only Royal Mirage is a historic hotel – it opened 21 years ago this year. Pictured is the opulent dining room 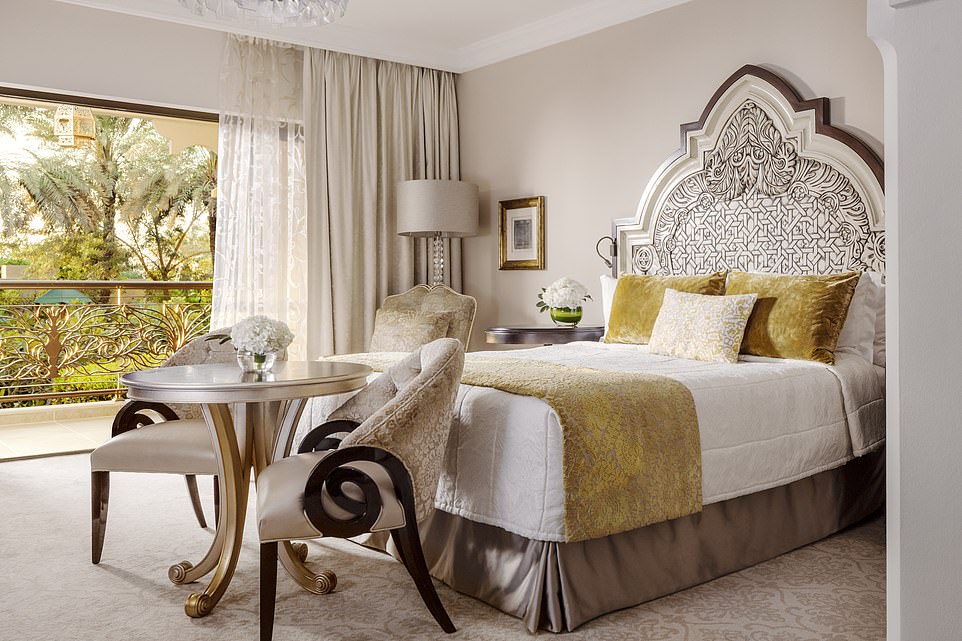 Dreamy accommodation: One of the very fine bedrooms at the One&Only Royal Mirage 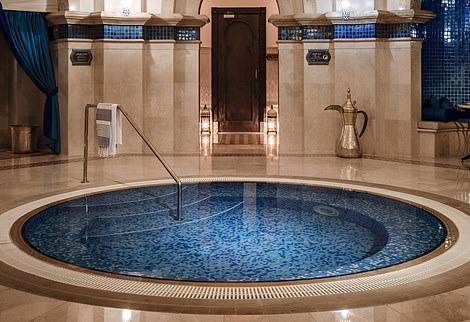 The spa at the One&Only Royal Mirage

The symbolism is irresistible: in Dubai, the future has been postponed.

This was to be a big year for the city and the wider UAE. Expo 2020, a mega trade fair with exhibitors from 190 nations was due to bring 25 million people to the city. It will now take place in October 2021.

I somehow doubt that name will survive: 2020 isn’t a year anyone here — a city where tourism, aviation and shipping are all vital industries — will much care to remember. 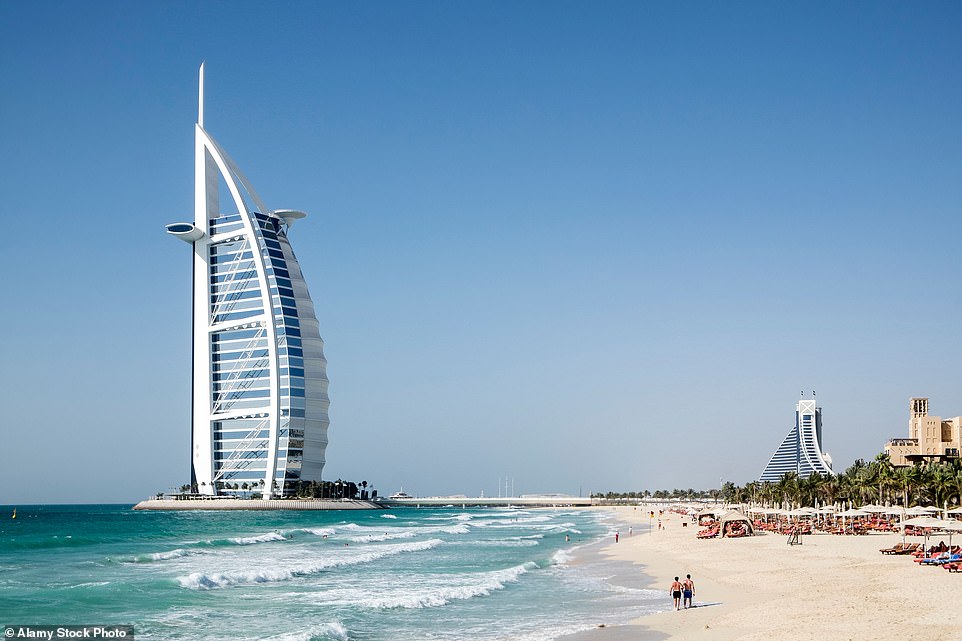 Dubai’s famous Burj al Arab hotel. This was to be a big year for the city and the wider UAE. Expo 2020, a mega trade fair with exhibitors from 190 nations, was due to bring 25million people to the city. It will now take place in October 2021

UNDERWATER HIKES AT THE BOTTOM OF AN AQUARIUM 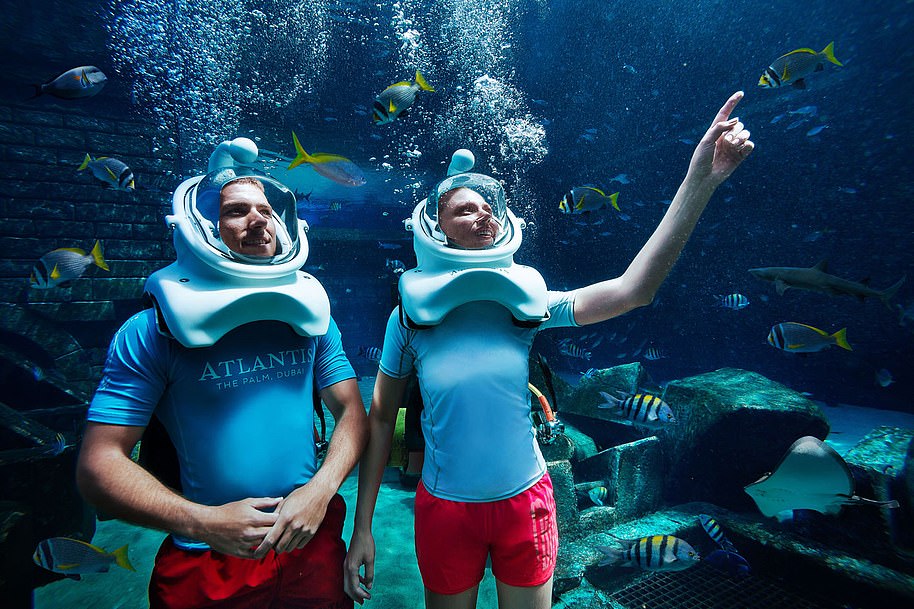 Two guests try out the AquaTrek Xtreme experience inside the Ambassador Lagoon at Atlantis, The Palm

As I lower myself down an artfully rusted ladder, a big diver’s helmet is placed over my head and attached to a strap on my back.

Minutes later, I am walking along the bottom of an aquarium, trying not to trip over basking sharks or get side-swiped by manta rays.

Welcome to new AquaTrek Xtreme inside the Ambassador Lagoon at Atlantis, The Palm. This is an indelible experience in which you brush fins with some of the 65,000 marine creatures who call it home.

As I wave at the tourists taking pictures on the dry side of the glass, I feel like an extra in the film Finding Nemo.

Dives are from £160. For more details, see atlantis.com.

Maybe next to the man-made Palm Islands they could build another one in the shape of a big pause button. That’s what Dubai feels like today: a city on hold, as I experienced first-hand last week.

But, for British travellers at least, the play button has been tentatively pressed after Dubai joined Transport Secretary Grant Shapps’ pool of travel bubbles.

You’ll need two things: an approved Covid test and a travel insurance policy that covers you should you fall ill with the virus. The alternative is to take your chances with a test on arrival at Dubai airport.

As a positive result leads to two weeks in a government hotel, I would take the test in the UK. That’s a serious upfront expense with the extortionate rates being charged by private clinics. But with package and flight prices at historic lows, you will still have a cheaper Dubai experience than at normal times. 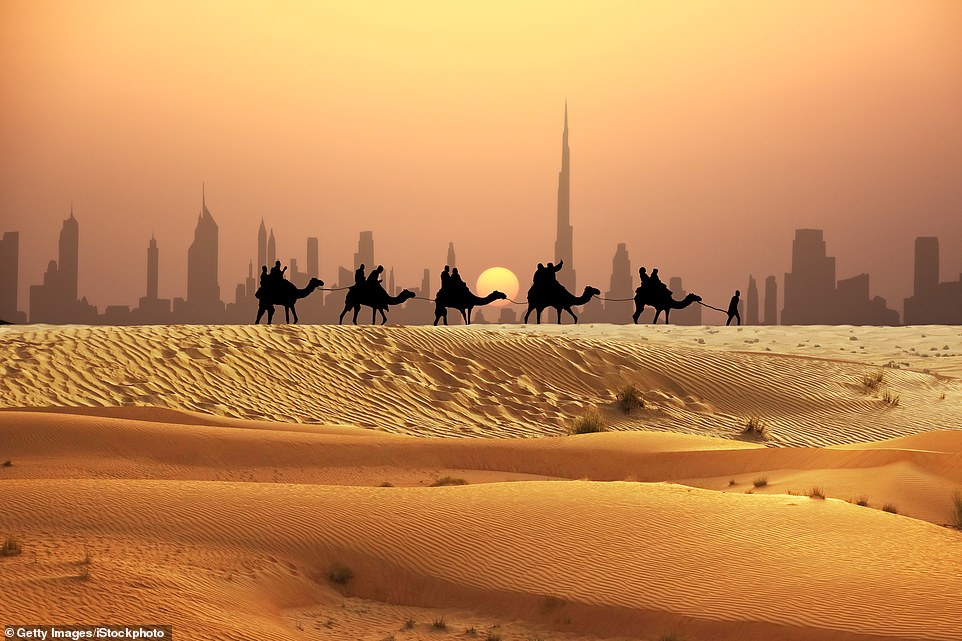 Out of this world: Tourists trek across the desert near Dubai on camels. Visitors to the city need to have proof of a negative Covid PCR (polymerase chain reaction) swab test taken 96 hours before departure

WHAT TO KNOW BEFORE YOU GO TO DUBAI

Dubai is on the Foreign, Commonwealth and Development Office’s ‘travel corridor’ list —meaning you do not have to go into quarantine on return.

Alternatively, it is possible to have a PCR test on arrival.

Were you to test positive on arrival, however, you may be required to self-isolate in a government-led facility, a hospital, or in your hotel or apartment.

You must have travel insurance covering treatment should you fall ill with Covid on your trip.

Check with your airline to make sure that the type of test certificate you are arranging is acceptable.

Further information at gov.uk and visitdubai.com/en/coronavirus-advisory.

Dubai has always been a safe city; and that now goes for the virus, too. The city’s lockdown was one of the world’s toughest.

The authorities here keep close electronic tabs on you at the best of times. So when residents were allotted two-hour slots for shopping, phones and vehicle licence plates were monitored and large fines issued.

Now, the city feels almost normal, though you still have to wear a face covering everywhere. I forget to put mine on in a taxi and the driver stops the car. The taxis are fitted with cameras to prosecute both drivers and passengers if you break the rule.

Sitting outside the Jetty Lounge in the One&Only Royal Mirage, Olivier Louis and I remove our masks as the champagne arrives. Olivier, the managing director of this resort and its sister property across the water on the Palm, offers two toasts: to the return of his British clients — and to the end of 2020. 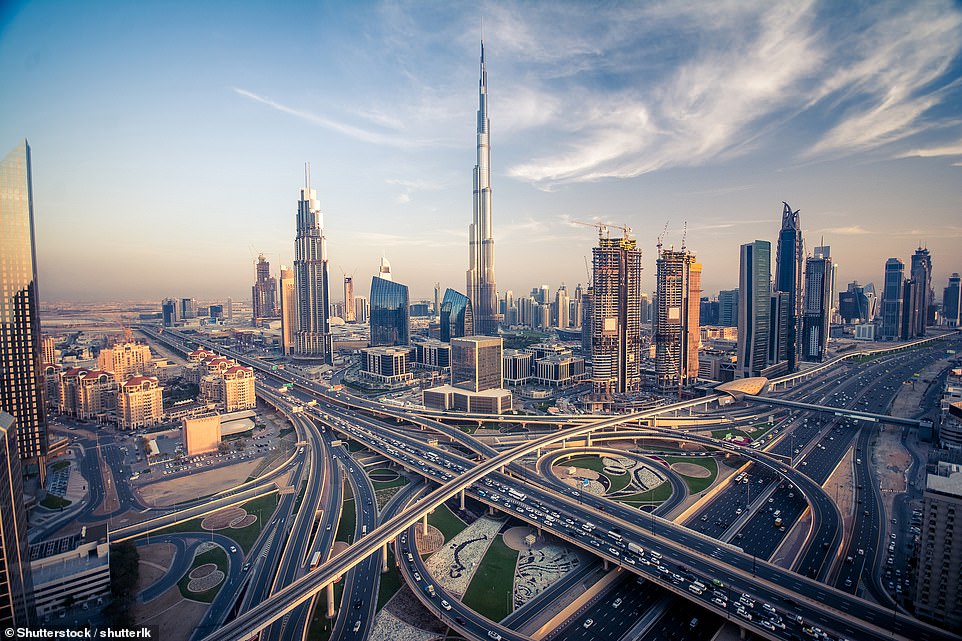 Mark says that Dubai has had two decades of negotiating a precarious path between conservative Muslim values and the needs of a high-spending, high-octane tourist and expat crowd

For a taste of the Empty Quarter, head for the vast desert land that stretches south, deep into Oman and Saudi Arabia.

I can’t help thinking of Wilfred Thesiger, the British explorer who made an epic crossing of the Empty Quarter in the 1940s.

He would doubtless be rather depressed at the idea that you can set out at sunrise in air-conditioned comfort, have a quick camel ride, see a Bedouin falconry display, take a selfie standing on the sand dunes — and still be back in plenty of time for lunch.

Hotel executives always talk up their occupancy rates but Olivier seems as bubbly as his Moet at the prospects for his business after a tough year.

One regular guest is already here on a booking of several weeks — the actor John Cleese. Another is cricketer Sir Geoffrey Boycott. I’d always associated Dubai with footballers and Love Islanders — but it seems our national treasures have a fondness for the place, too.

I tell Olivier that with Basil Fawlty around and England’s most blunt-speaking sportsman making an annual visit, his service had better be on top form.

And if you want Love Island, you can find it at the One&Only Royal Mirage’s Drift Beach Club. On my last day I have lunch there — but don’t feel I have the physique, the tattoos or the love of thumping house music to linger. I head gratefully back to my quiet garden room overlooking the Palm.

This is an historic hotel in the heart of ancient Dubai. The One&Only Royal Mirage opened 21 years ago this year — and in Dubai terms, that definitely qualifies as ancient.

Olivier smiles when he recalls his difficulties at the beginning — persuading guests to stay in a resort 13 miles from the centre of town. Now it is in the middle of one of Dubai’s many centres.

Another is on the way: a huge new development over at Dubai Creek with, inevitably, a new candidate for the world’s tallest building. Dubai’s Burj Khalifa still clings on to that honour. At 8pm, this is where Dubai feels most normal. Groups of people — rather than crowds — gather to see the fountain show, then drift into the Dubai Mall to gawp at watches, jewels, party dresses and the denizens of the in-mall aquarium. 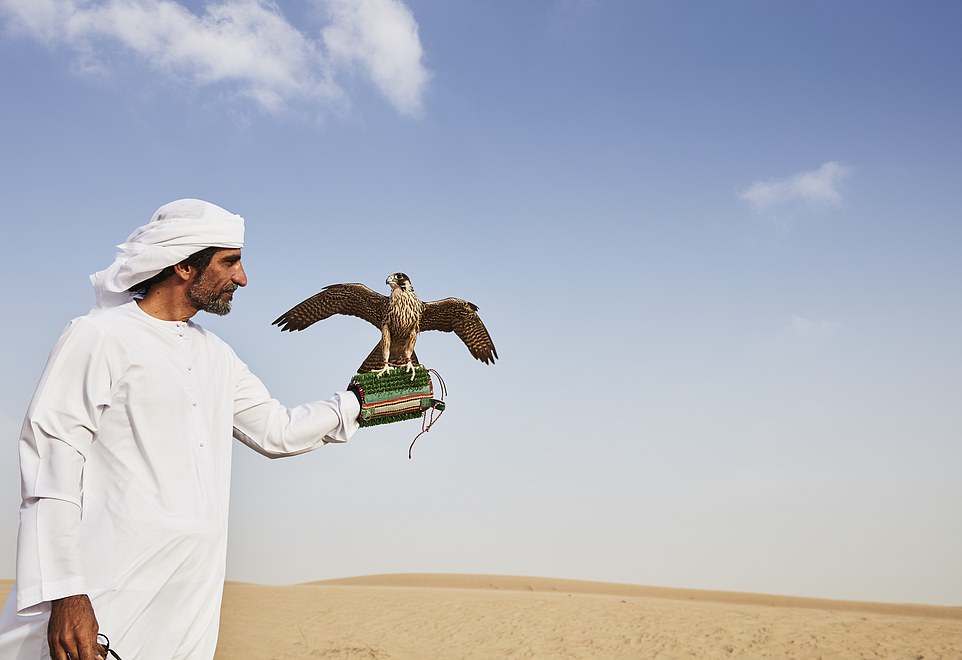 With package and flight prices at historic lows, you will have a cheaper Dubai experience than at normal times. Pictured is a Bedouin falconry display in the Dubai desert

Best At Travel offers a seven-night trip to the One&Only Royal Mirage staying in The Residence from £1,689pp on a half-board basis including return flights. Visit www.bestattravel.co.uk and www.oneandonlyresorts.com. The Bedouin Breakfast and Love Lakes Desert Safari with Platinum Heritage is £105 for an adult ticket. Visit platinum-heritage.com.

The other great sunset experience is a walk along the Palm. I want to stroll along the whole tree. Easier said than done. Dubai is talking a good game about becoming more cycling and walking-friendly but, for the moment, it’s still a city of highways and tunnels. All I can safely manage is half a trunk and a few fronds.

I stop for a pink gin at Koko, the latest place to be seen for expats. The atmosphere is relaxed, unlike the one, a few hours later, at the nearby Five Palm Jumeirah Hotel (an extraordinary structure, like a hollowed-out glass box).

The next day there are reports of a ‘wild brawl’ between guests in the lobby. My Dubai friends aren’t surprised: if watching an episode of Western Men Behaving Badly is your thing, it seems the Five is the place to go.

Dubai has had two decades of negotiating a precarious path between conservative Muslim values and the needs of a high-spending, high-octane tourist and expat crowd.

Now there are reports that the emirate is planning to further relax laws on drinking alcohol and couples co-habiting. Money rather than morality talks. Hotel room occupancy has been in a steady decline and Dubai has ambitions to become a global finance hub.

It also needs to attract sceptics such as me. I love the Middle East but I’ve always steered clear of Dubai: too flashy, too new. I was wrong. Sitting at dinner at the glamorous SAL restaurant under the graceful curve of the Burj Al Arab, I feel privileged to be in a city that has set the pace in the 21st century.

Because The Museum of the Future is already open. It’s called Dubai.