Carnival Cruise Line has taken delivery of its new £1 billion cruise liner called ‘Mardi Gras’ ahead of her big debut in 2021.

The company’s now-largest vessel wights 180,000 tonnes and is 1,130 ft (340m) long, and features a roller coaster that loops around a water park – and six on-board zones, including a French quarter.

The cruise line took delivery of Mardis Gras from the Meyer Turku Shipyard in Turku, Finland, where she was constructed. 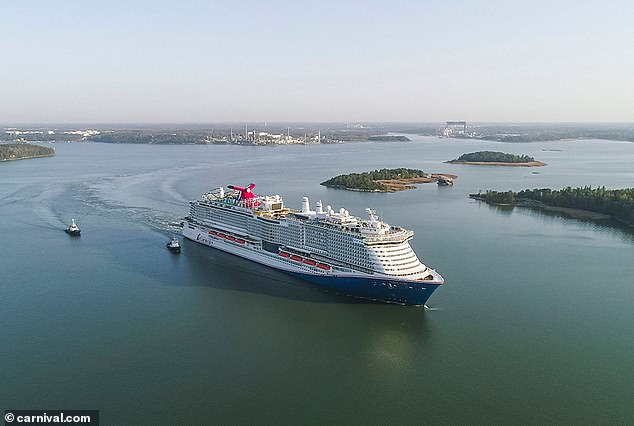 The Mardi Gras cruise liner, owned by Carnival Cruise Line, will set sail on its maiden voyage in 2021 after it was delayed from 2020 due to the coronavirus pandemic 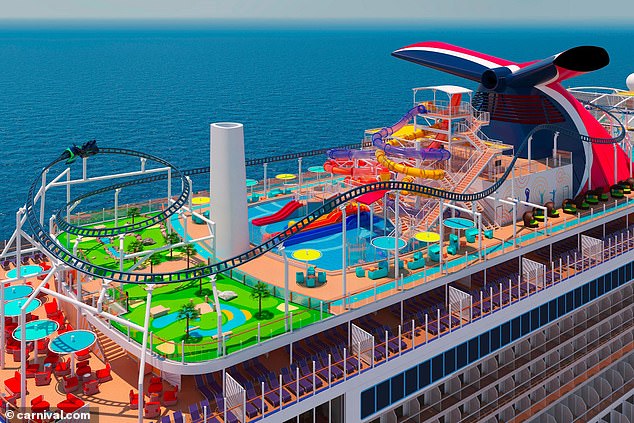 The ship was set to launch in 2020 but the occasion was pushed back into 2021 because of the pandemic, which docked most of the world’s cruise ships.

Now, the huge ship is being prepared for an inaugural cruise on April 24, 2021, when she will sail from Port Canaveral, Florida, visiting a number of stops in the Caribbean.

The ship’s name is a tribute to Carnival Cruise Line’s first ever cruise ship – built in 1972 – called the TSS Mardi Gras.

‘BOLT’ – the world’s first at-sea coaster – will allow riders to control the speed of their carriage and race eachother.

The ride will have self-propelled cars that ride on an 800-foot track, and reach speeds of up to 40 mph.

The track winds around the ‘Ultimate Playground’ zone that includes a water park with large pools and water slides.

Meanwhile, guests will be able to explore six themed areas full of leisure and dining experiences – including a restaurant backed by celebrity chef Emeril Lagasse. 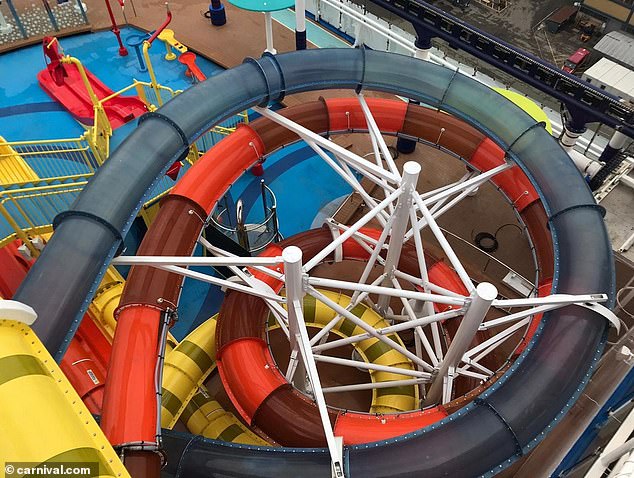 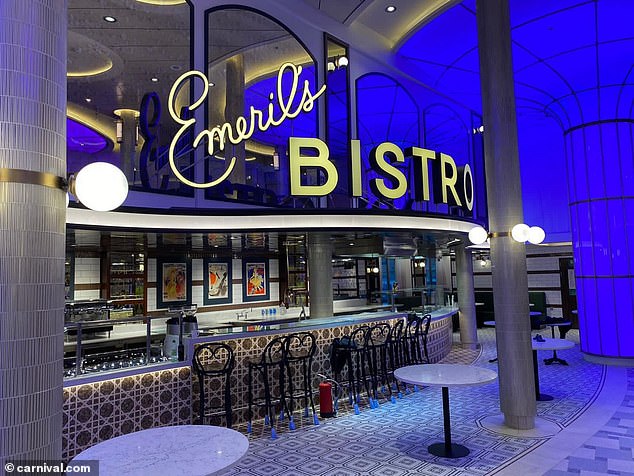 Mardis gras will have six on-board zones, including a French quarter, and have a number of bars and restaurants 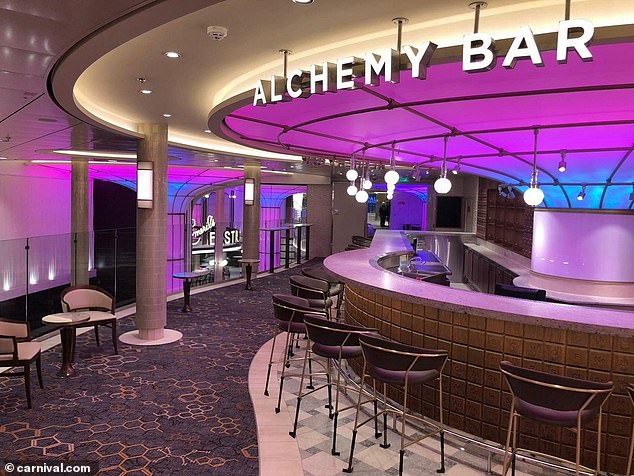 One of the restaurants is backed by celebrity chef Emeril Lagasse. Pictured: A bar on board the Mardi Gras

The ship will also be home to a number of shopping outlets.

Mardis Gras will also be the first ship to be powered by liquefied natural has (LNG), and the company has worked with Port Canaveral to build a new cruise terminal that can accommodate the ship and make the refuelling process easier.

The delivery of the mammoth cruise ship comes at a time when cruise travel is advised against in a number of countries.

The UK’s Foreign, Commonwealth & Development Office currently advises against travelling on cruise ships during the pandemic – based on medical advise from Public Health England.

‘Cruise ship travel means staying overnight for at least 1 night on a sea-going cruise ship with people from multiple households,’ the advice says. 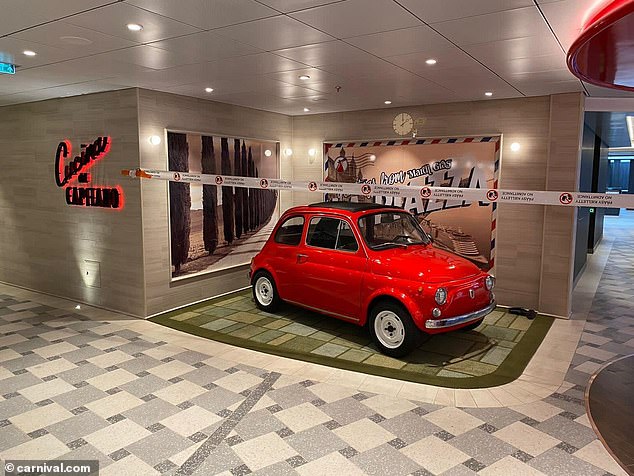 The ship was set to launch in 2020 but the occasion was pushed back into 2021 because of the pandemic, which docked most of the world’s cruise ships 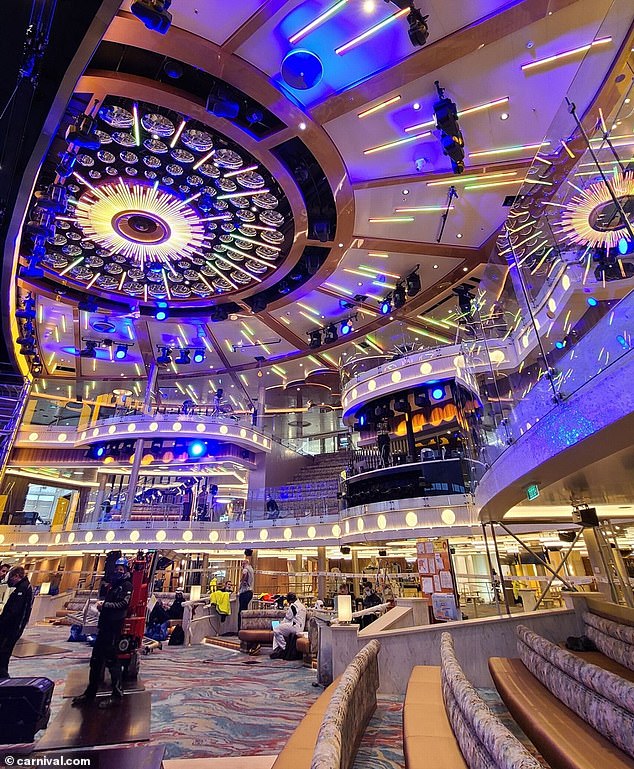 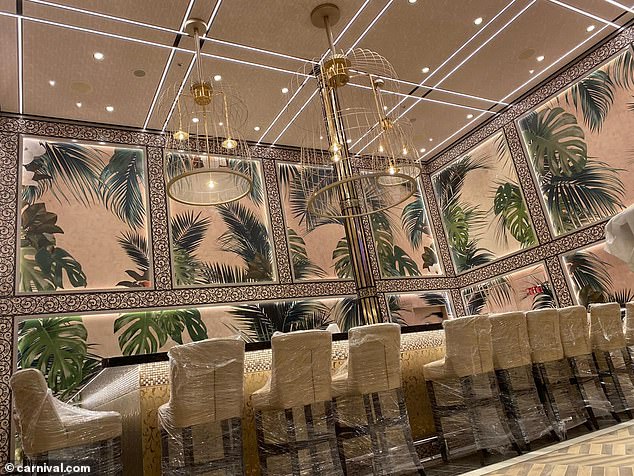 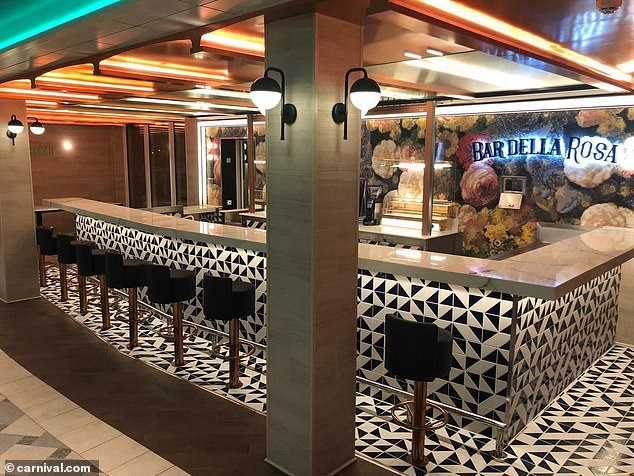 ‘Our advice against cruises applies to international travel on a ship that is exclusively for pleasure or recreation, providing overnight accommodation and other leisure facilities such as entertainment venues or swimming pools.’

An outbreak of Covid-19 on the Diamond Princess – another ship operated by Carnival – in the early stages of the pandemic caused alarm around the globe.

On February 1, the first passenger on the ship tested positive for coronavirus, followed by 10 more passengers on February 4, at which point it was quarantined.