Questions are being raised about why Government scientists didn’t sound the alarm over the new mutated strain of coronavirus until last week despite discovering it two months ago – amid claims data may have been held back to force Number 10 into a rash lockdown.

Top experts have also slammed the claim peddled by Boris Johnson and Chris Whitty that the variant is around 70 per cent more infectious than regular Covid, saying that the figure appeared to have been plucked from thin air in a desperate bid to justify the crushing Christmas curbs.

Boris Johnson sparked fury on Saturday night after he cancelled Christmas for more than 16million people living in London and across the South East. Five days of social mixing were also slashed to just one day for the rest of the UK. He said there was ‘no alternative’ way to stop the new variant after being presented with doom-mongering data from his scientists.

Furious Tory MPs said this morning the Government had again been ‘bounced by the science’ by experts who have previously got their forecasts and modelling wrong. They questioned the timing, which gave Number 10 little breathing room and came after MPs went on holiday, preventing the curbs from being voted down in Parliament.

Online records show the first case of the new strain was identified in mid-October at Public Health England’s laboratory in Milton Keynes, where experts are studying random samples from Covid-19-positive Brits to keep track of the virus as it evolves.

The new variant — named VUI-202012/01 — was detected in a positive swab taken from a patient in Kent the on September 20, when the country was recording just 3,700 daily cases.

Despite an explosion in infections in October, PHE did not alert the Government or its scientists to the mutated strain’s existence until December, by which point more than 1,100 people were confirmed to have had the new version of the virus.

At the start of the month information about VUI-202012/01 was passed to the New and Emerging Respiratory Virus Advisory Group (NERVTAG) committee, which advises England’s Chief Medical Officer, Chris Whitty. The group first discussed the strain at a December 11 meeting and began modelling its severity on the UK’s epidemic.

Ministers were not made aware of the variant until last Monday, almost two months after its initial discovery, when they were told it was more infectious and was probably behind the continued rise in cases in London and the South East. Even with that information, Boris Johnson insisted on Wednesday that lockdown loosening plans for Christmas would still go ahead, saying it would be ‘frankly inhuman’ to scrap them just days before they came into effect.

But on Friday, Nervtag told Professor Whitty that the VUI 202012/01 strain was spreading more quickly and could be up to 70 per cent more infectious than the normal version of the virus. The PM was then presented the doom-mongering data the following morning, which led to the screeching Christmas U-turn on Saturday night.

Independent scientists have also expressed criticisms about the 70 per cent figure after minutes from NERVTAG’s meeting on Friday revealed the expert committee had in fact only ‘moderate confidence’ that the new strain was more transmissible than other variants. 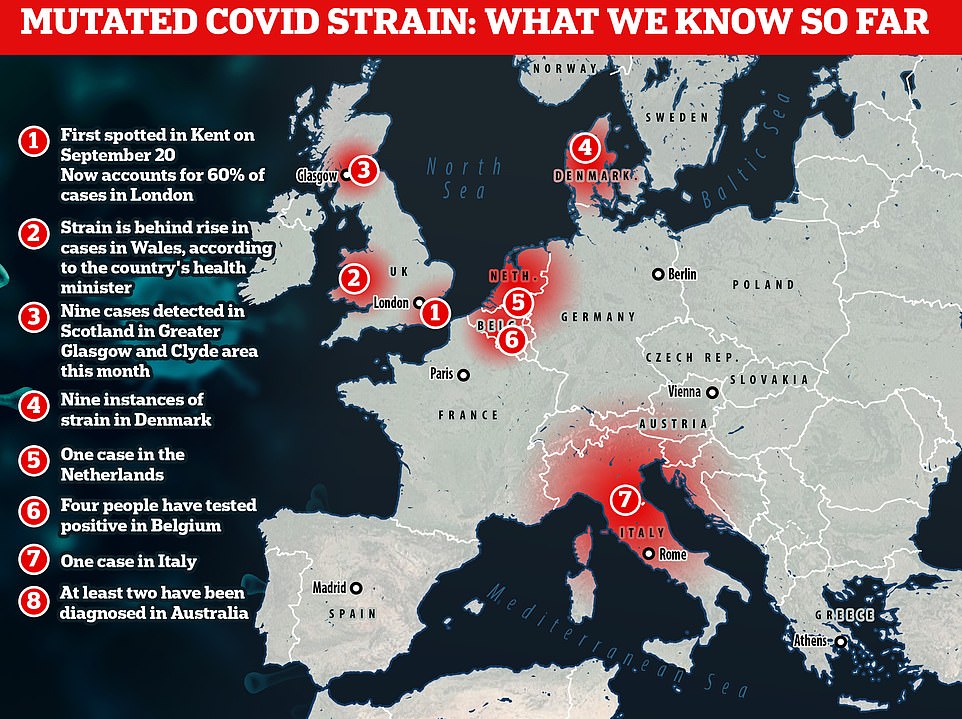 Italy has detected a patient infected with the mutated strain of coronavirus that emerged in Britain, becoming the fifth country outside the UK to report a case after the variant first emerged in Kent in September 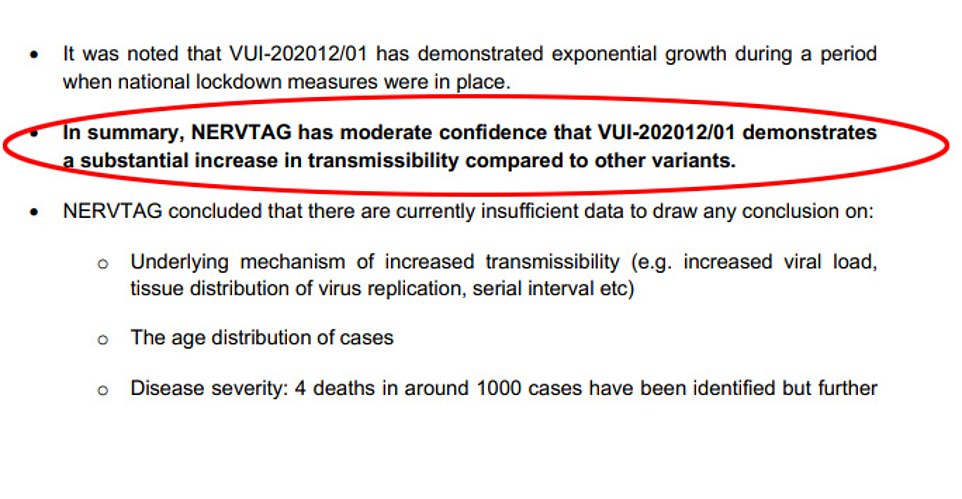 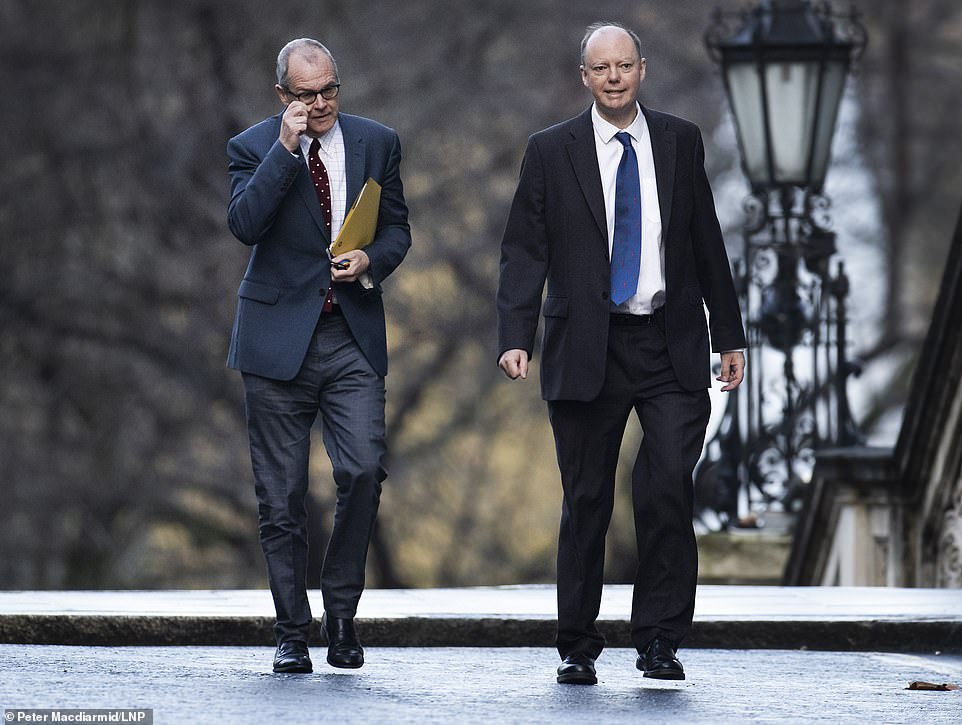 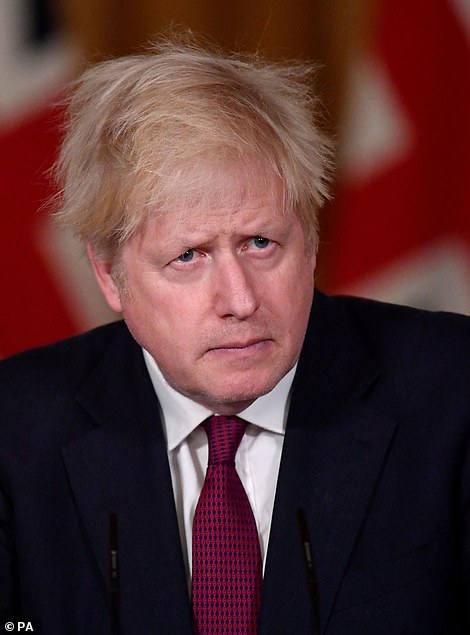 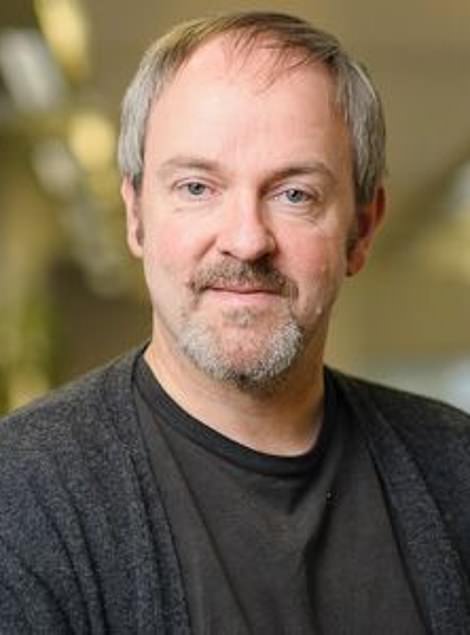 Carl Heneghan, Professor of Evidence Based Medicine at Oxford University’s Nuffield Department of Primary Care, expressed scepticism over the 70 per cent figure.

He said: ‘I’ve been doing this job for 25 years and I can tell you can’t establish a quantifiable number in such a short time frame.’ He added ‘every expert is saying it’s too early to draw such an inference’.

MPs accused Chief Medical Officer Professor Chris Whitty and Chief Scientific Adviser Sir Patrick Vallance of ‘stepping back into the shadows when it suits them’ to leave ministers to take the flak for controversial decisions.

Who knew what and when about Britain’s Covid mutation?

September 20: Patient in Kent became the first person to test positive for the new strain. At that point, the UK was recording just 3,700 new cases of the virus each day.

Mid-October: The sample wasn’t analysed until weeks later at Public Health England’s Lighthouse Lab in Milton Keynes, where experts are studying genomic sequences of Covid-19 to keep track of its mutations.

Not all mutations are logged as new strains as soon as they are found, because some fade away or turn out to be totally insignificant, which may explain why ministers were not alerted to its existence.

December 13: A total of 1,108 cases associated with the strain had been detected by PHE, although this is likely to be an underestimate because PHE is sent random swab samples to analyse, rather than every positive test.

December 14: Health Secretary Matt Hancock is briefed by Government scientists about the strain, known as VUI – 202012/01.

SAGE had been struggling to work out why infections continued to rise in the South East during the national lockdown, which drove cases down in every other part of the country.

Mr Hancock broke the news to the public at a Downing Street press conference, saying the variant may have been behind the surge in infections in London and Kent.

December 16: Boris Johnson promises plans to relax lockdown for Christmas get-togethers would still go ahead, saying it would be ‘frankly inhuman’ to scrap the move.

December 19: Chris Whitty and Sir Patrick Vallance attended a meeting of Nervtag – the New and Emerging Respiratory Virus Threats Advisory Group – to discuss the severity of the strain.

December 20: Key findings showing from the meeting showing the variant was 70 per cent more transmissible were presented by the Chief Medical Officer to Boris Johnson the following morning.

However, minutes from the meeting published revealed the expert committee had in fact only ‘moderate confidence’ that the new strain was more transmissible than other variants.

December 21: More than a dozen countries – including France, Germany, Italy, Ireland and Canada – banned travel to and from the UK as part of an international crackdown to contain the mutant strain.

Professor Heneghan said there was no doubt this time of the year, the ‘height of the viral season’, was a difficult time for the NHS. But he said failure to put out the basis of the figures was undermining public trust.

He added: ‘I would want to have very clear evidence rather than ‘we think it’s more transmissible’ so we can see if it is or not. ‘It has massive implications, it’s causing fear and panic, but we should not be in this situation when the Government is putting out data that is unquantifiable.’

He added: ‘They are fitting the data to the evidence. They see cases rising and they are looking for evidence to explain it.’ Professor Heneghan said that if it was true the new variant was more transmissible ‘we should be locking down the whole country’ as people leaving the capital to avoid restrictions would spread it.

The growing scepticism about the new strain came as Mr Johnson held crisis talks with ministers after France banned lorries carrying freight from the UK and countries around the world ended flights to Britain amid fears of the new coronavirus variant.

The Prime Minister will chair a meeting of the Government’s Cobra civil contingencies committee this morning after warnings of ‘significant disruption’ around the Channel ports in Kent.

Hauliers were urged to stay away from the area because of potential problems as the end of the Brexit transition period also looms on December 31.

Kent Police said they were implementing Operation Stack in a bid to ease potential congestion, while the Department for Transport said Manston Airport was also being prepared as another contingency measure against the anticipated level of disruption.

Countries including France, Germany, Italy, the Netherlands, Belgium, Poland, Austria, Denmark, Ireland, and Bulgaria announced restrictions on UK travel following the disclosure that the highly infectious new strain is widespread across the South East of England.

The international crackdown came amid rising Tory anger over the Government’s latest coronavirus curbs as MPs demanded Parliament be recalled this week.

Former minister Sir Desmond Swayne said ‘it does have all the characteristics of the Government being bounced by the science, as it was right at the beginning of the arrangements when we first went into lockdown last March’.

He told BBC Radio 4’s Today programme: ‘The arrangements for Christmas were explicitly voted on by Parliament. If they’re to be changed then in my view, Parliament should vote again.’

He added: ‘Parliament voted explicitly for a certain set of arrangements, it seems to be perfectly proper therefore that Parliament should be consulted when those are changed, irrespective of the Government acting in an emergency, nevertheless it’s perfectly proper to recall Parliament at the beginning of this week to at least ratify those changes.

‘Explain to us – we are after all a democracy, explain to the elected representatives the evidence that they have and why they’ve reached this decision.’

Sir Desmond suggested the Government had known for a while it was going to launch a fresh crackdown but waited for MPs to break for Christmas before announcing the measures in order to avoid a Commons backlash.

He said: ‘Yes, they’ve been looking at it [the new variant] since September and how convenient when Parliament went into recess on Thursday suddenly they were then able to produce this revelation.

‘Let’s see the evidence then, let’s have Parliament back and show us and convince us, come clean.

‘I want Parliament to be recalled so we can scrutinise properly in a democracy decisions that are being made which affect our economy radically and our liberty.’

He said a failure to recall Parliament would demonstrate the Government is ‘frightened of its Parliament’.

Sir Iain Duncan Smith, the former Tory leader, said it is ‘clear that Tier 4 is much the same as a third lockdown’ and the decision should be urgently debated by MPs.

Writing in The Telegraph he said: ‘It’s too easy just to blame Government ministers for all these decisions – what about their scientific advisers, who have a vital role in deciding these restrictions but are adept at stepping back into the shadows when it suits them?’

He added: ‘Why did they not alert ministers to the dangers earlier? Especially when, as we now know, scientists learnt about this mutation back in September.’

Sir Iain pointed to previous mistakes made by the Government’s scientific advisers and said that ‘when epidemiologists try to produce forecasts they are no more accurate than economists’.

Sir Charles Walker, the vice chairman of the influential 1922 Committee of Tory MPs, echoed a similar sentiment yesterday as he said: ‘The Government, in my view, knew on Thursday, possibly even Wednesday, that they were going to pull the plug on Christmas but they waited till Parliament had gone.

‘That, on top of everything else, is a resigning matter. I am not asking for the Government to collapse. I am asking for a secretary of state to take some responsibility.’

Health Secretary Matt Hancock said yesterday that ministers were only informed on Friday that an increase in infections in London and the South East of England was linked to a mutant new strain of coronavirus.

The new Tier 4 restrictions mean more than 16 million people across London, the South East and East of England have now been told to stay at home as much as they can.

Whitehall sources suggested the stay at home message could last until most over-50s have received a coronavirus vaccine – a timeline which would likely take the country to Easter or beyond.