Revellers in Tier 2 towns and cities were celebrating their freedom last night while millions of others were plunged into tougher lockdown restrictions.

The PM was accused of ‘inconsistency and confusion’ after the extraordinary last-minute U-turn to put a third of England, including London and swathes of the home counties, into a brutal new ‘Tier 4’ from midnight last night.

The draconian bracket means non-essential shops being forced to shut, and travel restrictions including a ‘stay at home’ order for Christmas Day itself – even though Mr Johnson insisted just days ago that it would be ‘inhuman’ to axe five-day festive ‘bubbles’.

The rest of England will not escape unscathed, with up to three households now only allowed to mix on Christmas Day rather than between December 23 and 27.

The measures will be reviewed within two weeks, but officials admitted they are pessimistic about them being lifted then.

Meanwhile, those in tier 2 cities – including in Bristol, York and Liverpool – celebrated their freedom by hitting the bars and restaurants on the final weekend before Christmas. 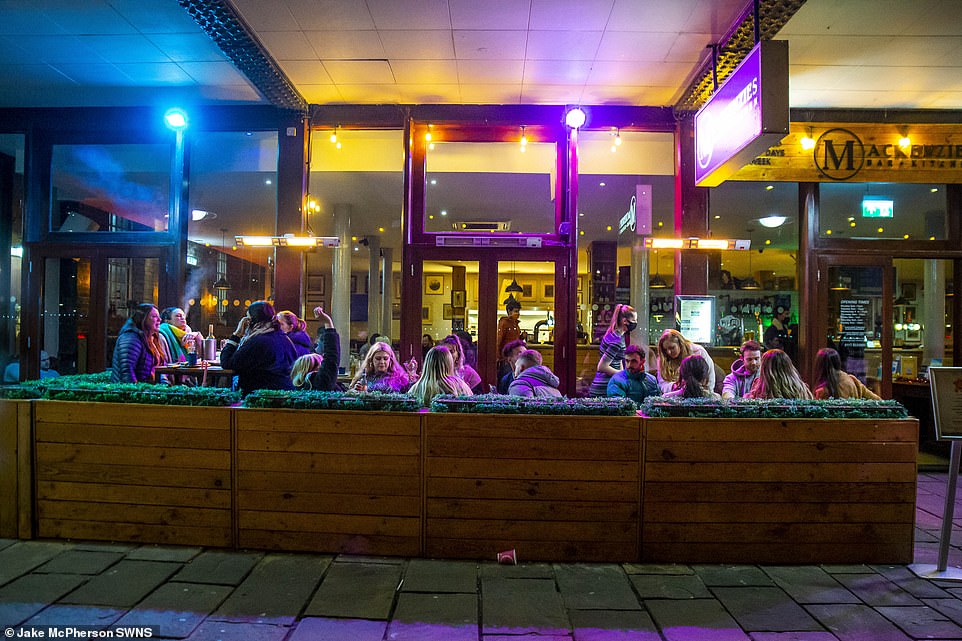 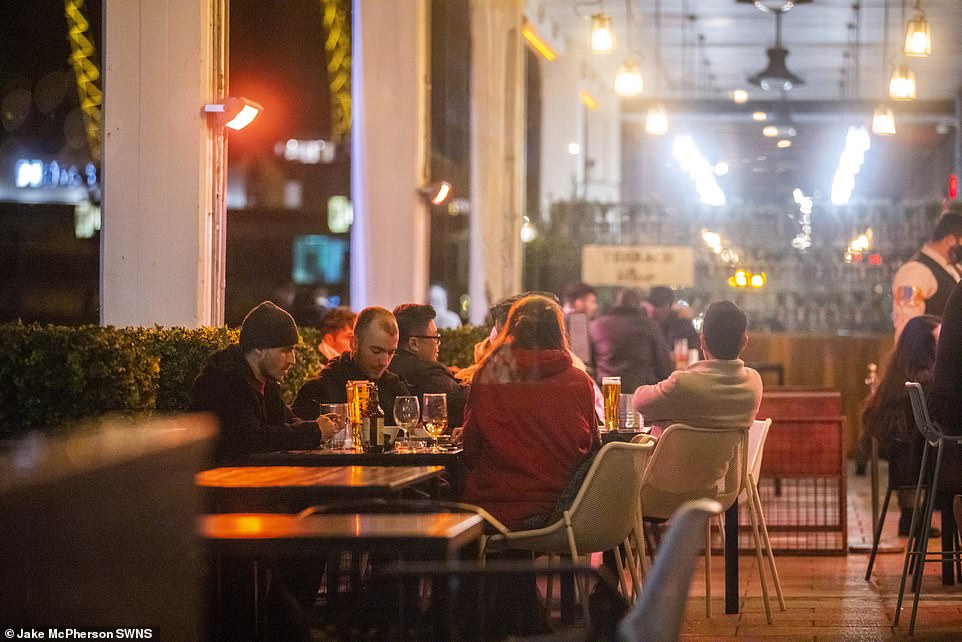 Under tier 2 rules, you may meet indoors with people who you live with or are in a support bubble with while, outdoors, you can meet family and friends in groups of up to six people. Pictured: revellers enjoy a drink in Bristol as it enters tier 2 rules 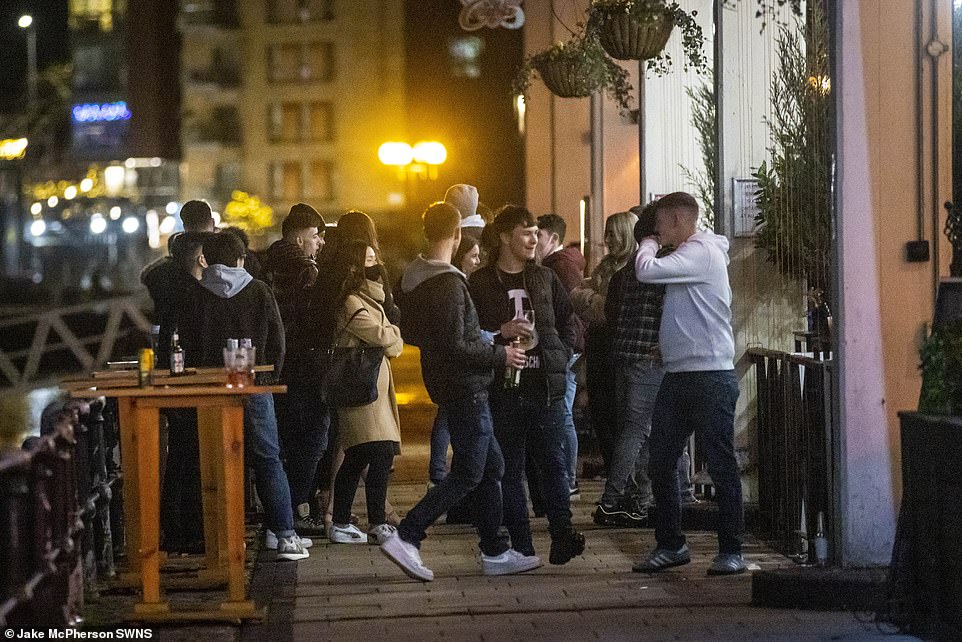 Under tier 2 rules, people are allowed to meet indoors, including public venues, with those whom they live with or people whom you have formed a support bubble with.

Outdoors, you can meet family and friends who you do not live with in groups no larger than six.

Venues such as restaurants and pubs, which are allowed to stay open under Tier 2, must use Covid-secure measures and follow Government guidelines.

Bristol and North Somerset were among areas that were downgraded from tier 3 to tier 2 this week to join Bath, Cheltenham and Swindon in the region in the less restrictive tier as infections rates have dropped.

Matt Hancock said the ‘vast majority’ of places in tier 3 restrictions will not be changed, but added in the Commons this week: ‘In Bristol and North Somerset rates have come down from 432 per 100,000 to 121 and falling.’ 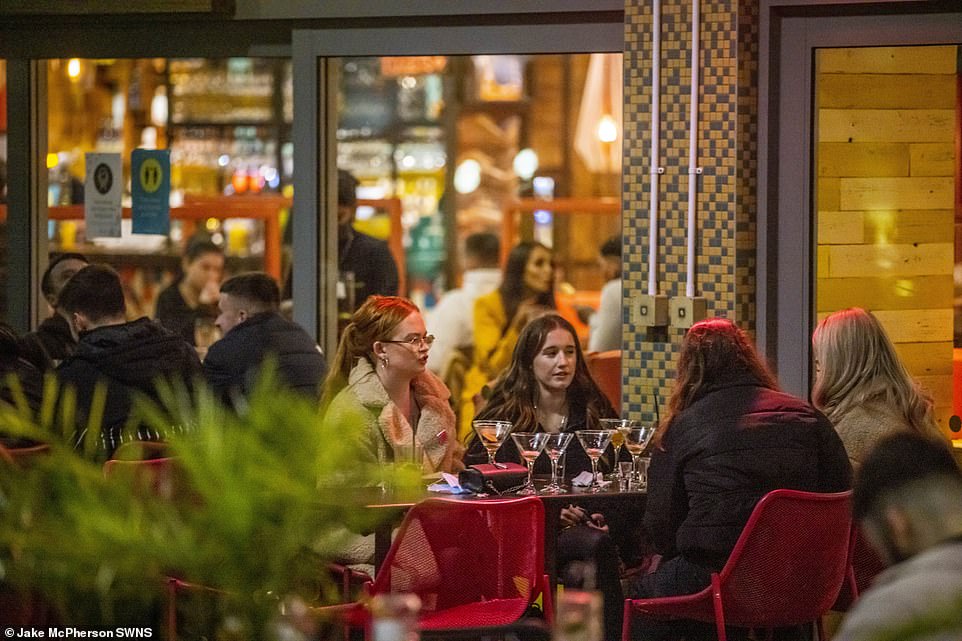 After drop in the number of infections, Bristol was one of few areas to have restrictions relaxed meaning different households could meet outdoors. Pictured: people drink at a restaurant in Bristol where they are now under tier 2 restrictions 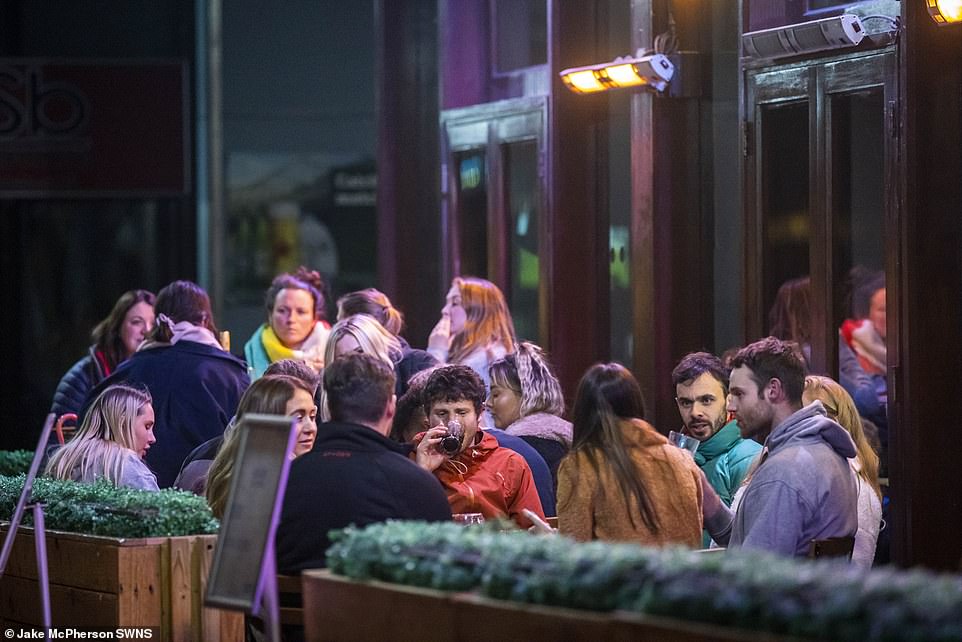 Under tier 2 rules, bars and restaurants are expected to follow Government guidelines and maintain Covid-secure practices while those meeting from different households must only meet outdoors. Pictured: revellers drinking at a bar in Bristol

Meanwhile, cities including York and Liverpool remain in the ‘high’ tier 2 bracket, it was confirmed on Thursday.

Under the new Tier 4 restrictions, which affects areas including London, parts of Essex and Peterborough, pubs and restaurants as well as all non-essential shops must close.

The rules also state you cannot leave or be outside of your home unless you have what the Government deems a specific purpose, or a ‘reasonable excuse’.

These excuses include essential activities such as food shopping and exercise, childcare arrangements or going to work. 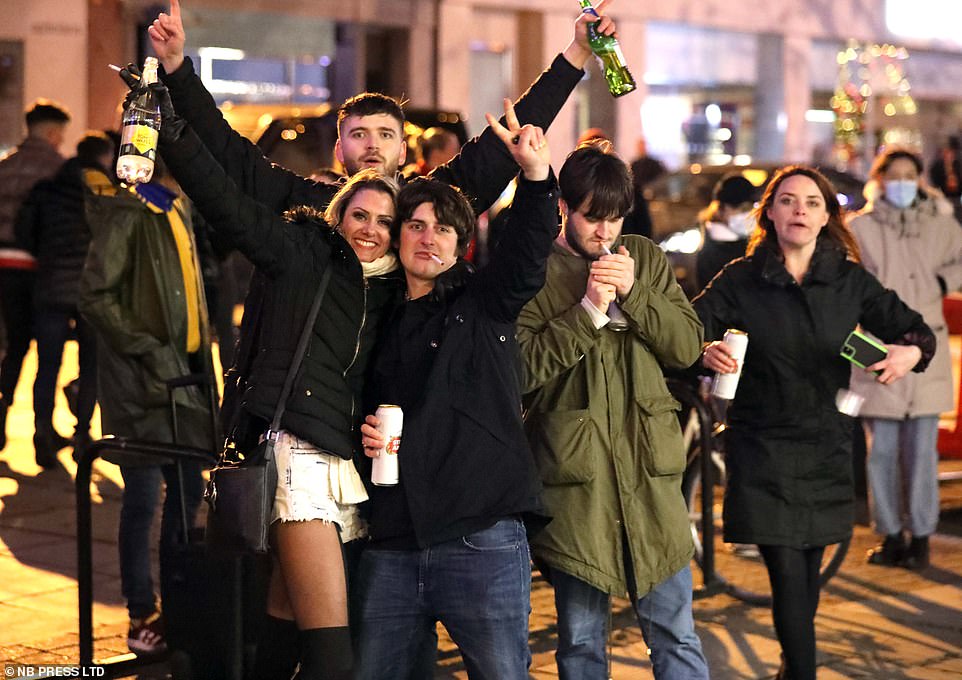 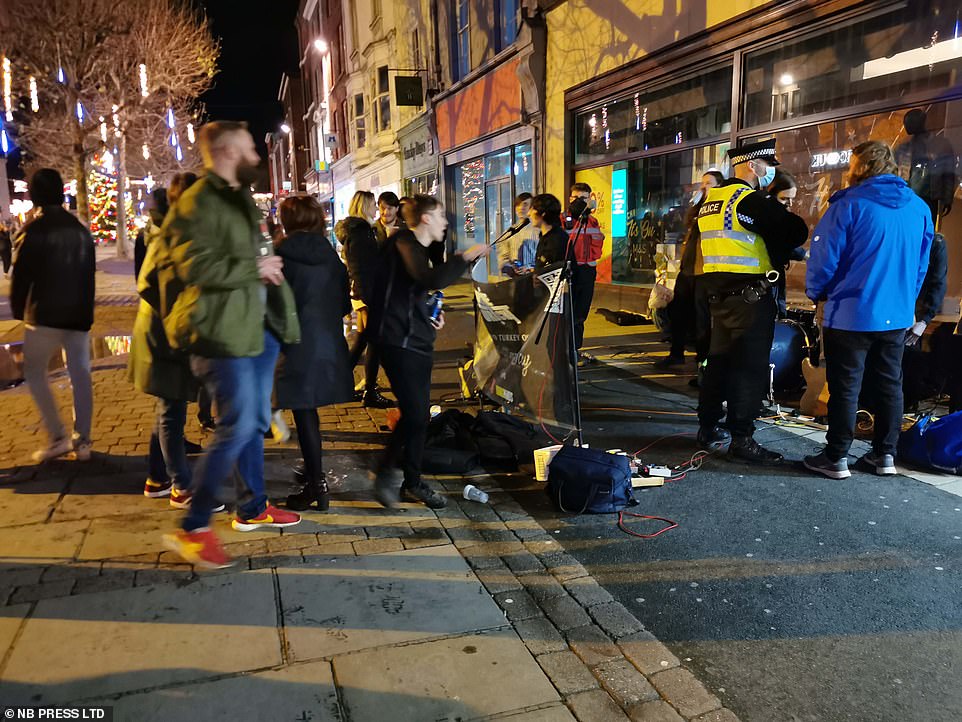 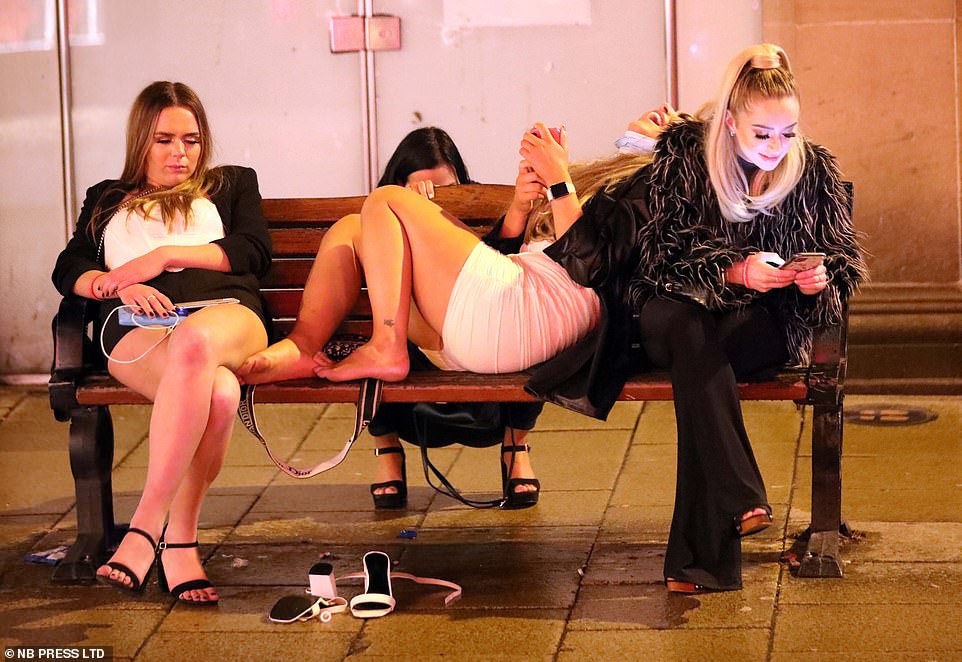 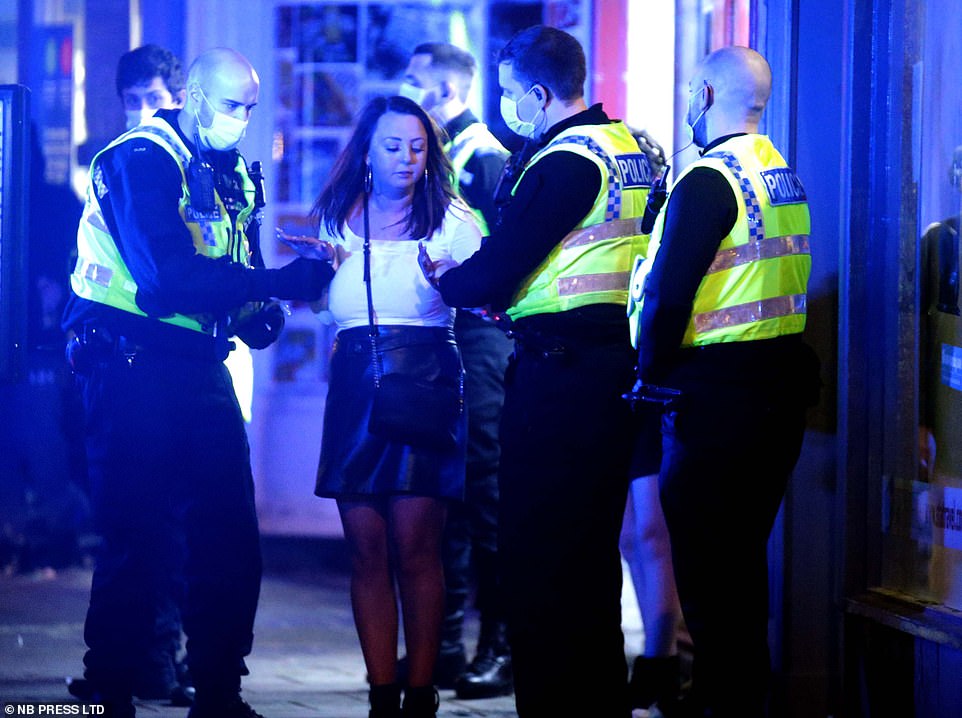 Pictured: police officers speak to a reveller who was out partying in the city of York last night where tier 2 rules are in place

Meanwhile, SAGE now estimates the Covid R rate – the average number of others infected by each person with the disease – is between 1.1 and 1.2 in the UK.

It is the first time the reproductive number has definitely been above the crucial mark since the first week of the national lockdown last month.

In England, the rate stands even higher at between 1.1 and 1.3, while experts warned it might be as high as 1.4 in the East, and 1.3 in both London and the South East. Last week, Britain’s R number – which doesn’t represent Friday’s outbreak – was between 0.9 and 1. 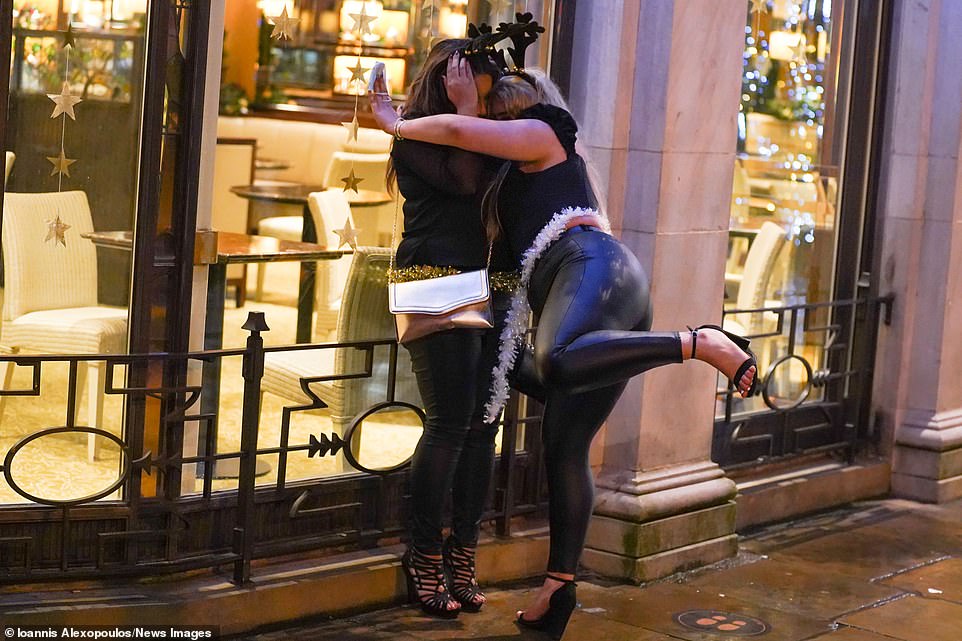 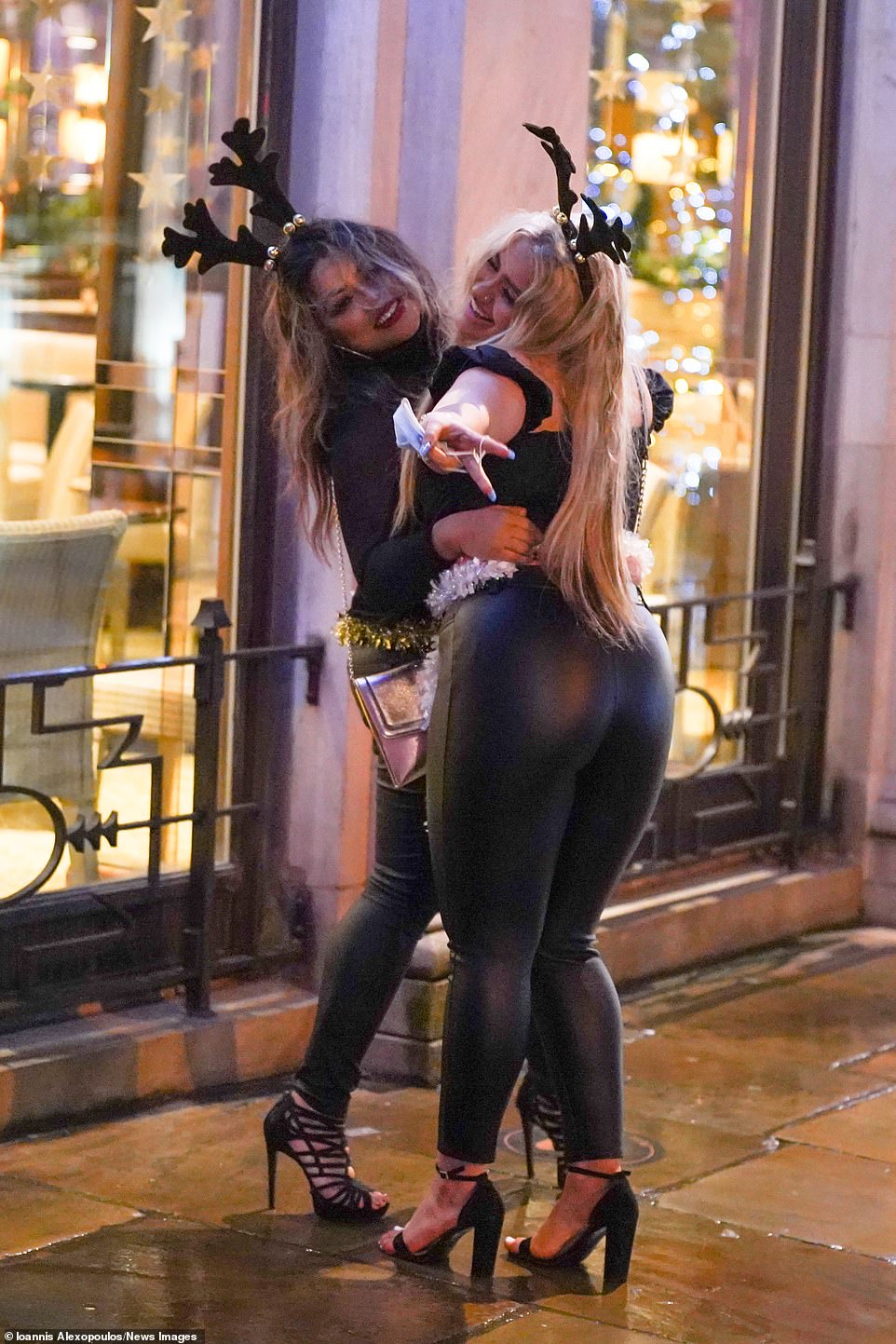 The Tier 4 bracket means non-essential shops being forced to shut, and travel restrictions including a ‘stay at home’ order for Christmas Day itself – even though Mr Johnson insisted just days ago that it would be ‘inhuman’ to axe five-day festive ‘bubbles’.

The rest of England will not escape unscathed, with up to three households now only allowed to mix on Christmas Day rather than between December 23 and 27.

Within 90 minutes of the PM’s bombshell announcement, Londoners were jumping into cars and taxis and even hiring vehicles to escape the city before Tier 4 came into force, the AA told the Mail on Sunday.

Its president Edmund King called the fleeing a ‘mini exodus’, adding: ‘It is almost like a wall is coming down around London and the South East and some people are scrambling to get away to save their Christmas before midnight.’

Northerners warned against Londoners fleeing the capital after videos and photos appeared on social media which showed long queues in St Pancras Station.