President Donald Trump on Saturday night blamed China for the financial strain being felt by Americans impacted by the coronavirus pandemic, as he refused to sign into law a massive $900 million coronavirus relief bill.

The president repeated calls for stimulus checks to be boosted to $2,000 instead of the $600 promised by the current bill, which was overwhelmingly passed by Congress on Tuesday.

On Saturday night, unemployement benefits lapsed for 14 million Americans after Trump refused to sign the bill while a government shutdown also looms.

According to the Brookings Institute, 10 million unemployed workers will lose compensation immediately from Saturday while an additional 3.8 million workers are at risk of losing benefits within weeks.

Yet the president remained adamant that the current proposed legislation is not good enough. 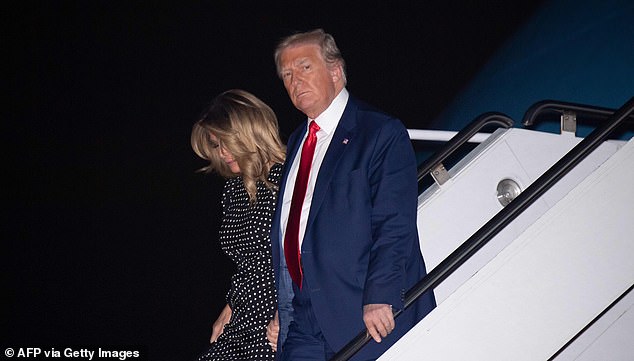 14 million Americans will lose unemployment benefits from Saturday because of Trump’s refusal to sign the bill, yet the president continues to insist it isn’t good enough. Trump is pictured with First Lady Melania Trump in West Palm Beach on Wednesday 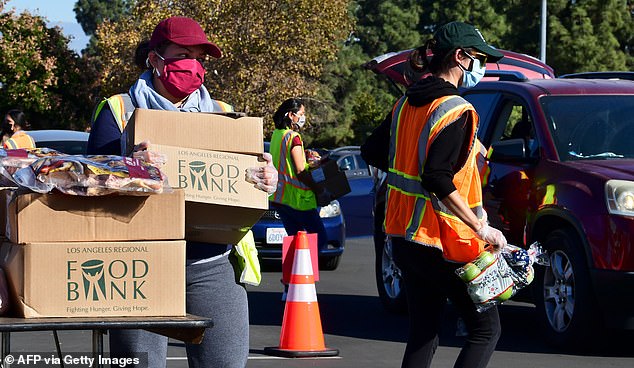 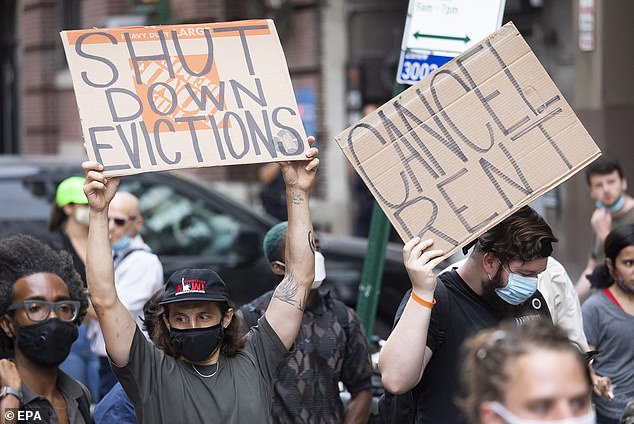 Trump’s continued refusal to sign the bill would lead to the expiration of eviction protections and put on hold a new round of subsidies for hard-hit businesses, restaurants and theaters, as well as money for cash-starved transit systems and for vaccine distribution

Trump has continously blamed China for the pandemic, dubbing COVID-19 the ‘China virus’ and blaming it for outbreak and the shutdowns and closures that followed.

The end-of-year COVID relief and spending bill had been considered a done deal before Trump’s sudden objections.

Yet it remained in limbo early Sunday morning as the president continued to demand larger COVID relief checks and complained about ‘pork’ spending.

Without the widespread funding provided by the massive measure, a government shutdown will occur when money runs out at 12:01 a.m. Tuesday.

Washington has been reeling since Trump turned on the deal after it had won sweeping approval in both houses of Congress and after the White House had assured Republican leaders that Trump would support it.

Instead, he assailed the bill’s plan to provide $600 COVID relief checks to most Americans – insisting it should be $2,000.

But Trump has not been swayed in spite of the nation being in the grip of a pandemic.

‘I simply want to get our great people $2000, rather than the measly $600 that is now in the bill,’ Trump tweeted earlier Saturday.

‘Also, stop the billions of dollars in “pork”,’ he wrote, referencing additonal spending that had been latched onto the main bill providing financial relief to the nation.

‘I simply want to get out great people $2000, rather than the measly $600 that is now in the bill,’ Trump stated. ‘Also, stop the billions of dollars in “pork”’ 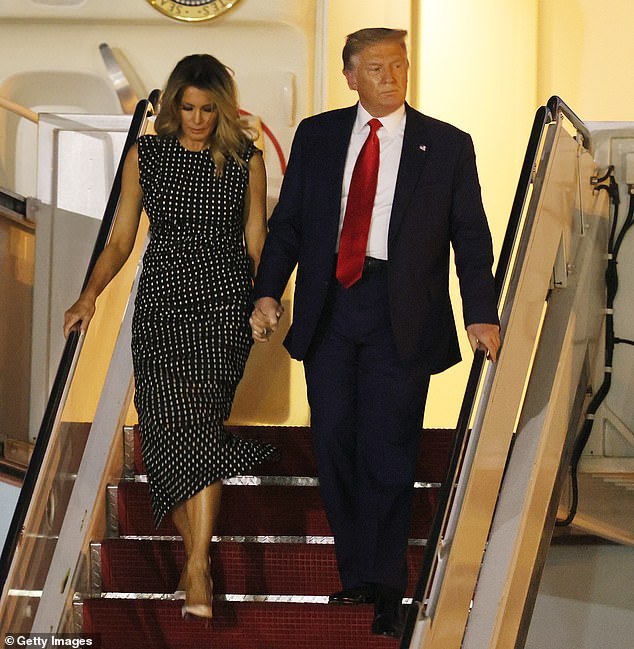 On four separate occasions Saturday , Trump made the same tweet about wanting to get Americans $2000 in COVID-19 relief after days of slamming the $600 agreed upon by Congress. Pictured with First Lady Melania on Wednesday

Lauren Bauer, a fellow in economic studies at the Brookings Institution, calculated that 11 million people would lose aid from the programs immediately without additional relief.

Millions more would exhaust other unemployment benefits within weeks.

However, Andrew Stettner, an unemployment insurance expert and senior fellow at the Century Foundation think tank, said the number may be closer to 14 million because joblessness has spiked since Thanksgiving.

About 9.5 million people had been relying on the Pandemic Unemployment Assistance program that expired altogether Saturday.

That program made unemployment insurance available to freelancers, gig workers and others who were normally not eligible.

After receiving their last checks, those recipients would not be able to file for more aid, Stettner said.

While payments could be received retroactively, any gap would mean more hardship and uncertainty for Americans who had already grappled with bureaucratic delays, often depleting much of their savings to stay afloat while waiting for payments to kick in.

In addition to the unemployment benefits that have already lapsed, Trump’s continued refusal to sign the bill would lead to the expiration of eviction protections and put on hold a new round of subsidies for hard-hit businesses, restaurants and theaters, as well as money for cash-starved transit systems and for vaccine distribution.

The relief was also attached to a $1.4 trillion government funding bill to keep the federal government operating through September, which would mean that failing to sign it by midnight Tuesday would trigger a federal shutdown.

‘It is the day after Christmas, and millions of families don´t know if they´ll be able to make ends meet because of President Donald Trump´s refusal to sign an economic relief bill approved by Congress with an overwhelming and bipartisan majority,’ Biden said in a statement.

He accused Trump of an ‘abdication of responsibility’ that has ‘devastating consequences.’ 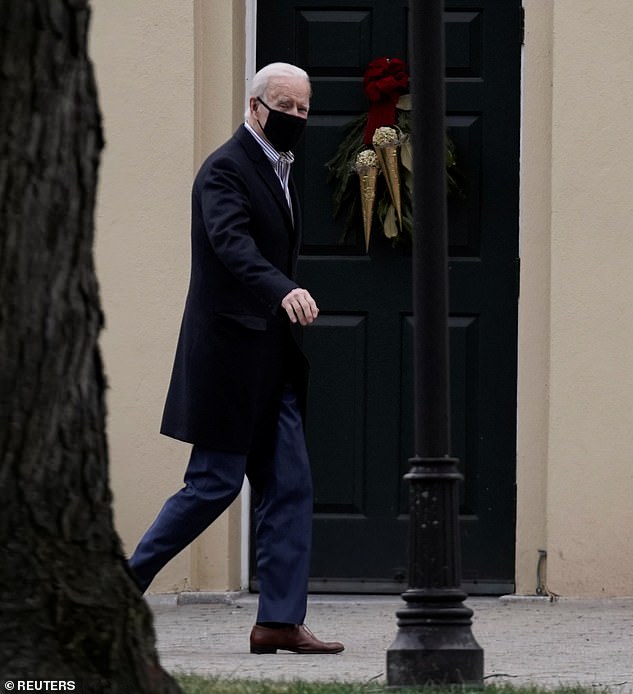 Biden is pictured here, on his way to church in Wilmington, Delaware, on Saturday 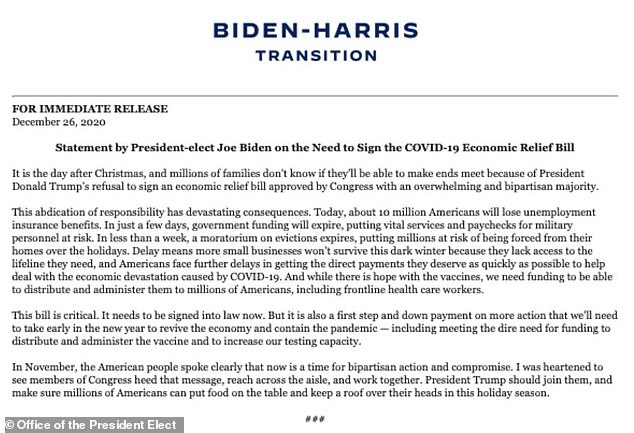 Yet Trump continued to ignore the requests from Biden, just as he continued to refuse to concede the election.

Earlier on Saturday night, Trump returned with another round of claims of election fraud in a fiery Twitter tirade in which he concluded ‘We will win’.

The president blasted the FBI, the U.S. court system and the Department of Justice before declaring that the country’s electoral system is ‘like that of a third world country’.

He called on Republicans to help him fight for the presidency as he took further hits and the press and tech companies amid allegations of voter fraud that U.S. courts and the Justice Department have deemed to be unfounded.

‘Time for Republican Senators to step up and fight for the Presidency, like the Democrats would do if they had actually won,’ Trump wrote in a Twitter thread.

Earlier on Saturday night, President Trump returned with another round of claims of election fraud in a fiery Twitter tirade in which he concluded ‘We will win’ 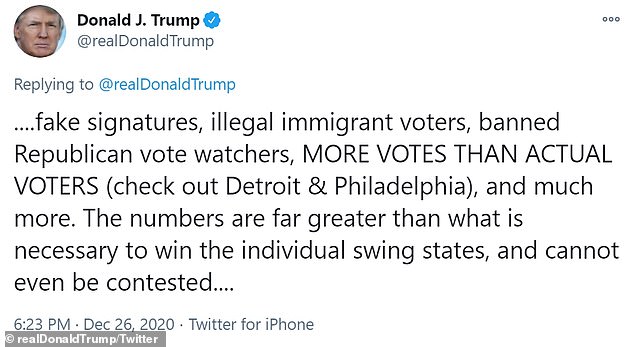 ‘The proof is irrefutable! Massive late night mail-in ballot drops in swing states, stuffing the ballot boxes (on video), double voters, dead voters, …fake signatures, illegal immigrant voters, banned Republican vote watchers, MORE VOTES THAN ACTUAL VOTERS (check out Detroit & Philadelphia), and much more,’ he added, despite his campaign having so far being able to offer no evidence to prove that any of these allegations were true and his lawsuits being dismissed.

‘The numbers are far greater than what is necessary to win the individual swing states, and cannot even be contested…. Courts are bad, the FBI and ‘Justice’ didn’t do their job, and the United States Election System looks like that of a third world country,’ Trump fumed.

‘Freedom of the press has been gone for a long time, it is Fake News, and now we have Big Tech (with Section 230) to deal with.

‘But when it is all over, and this period of time becomes just another ugly chapter in our Country’s history, WE WILL WIN!!!’ the president concluded.